Silver How rises above the village of Grasmere – from the Chemist shop look towards the village and there’s Silver How our goal for today.  After being sunburnt yesterday on our walk to Blencathra I kept myself well covered today!  Pal decided to have an easy day today and stayed at Boxtree Cottage in Dacre, so it’s just Mila and I for the walk to Silver How today.  An easy walk was planned – to give my old knees a rest after yesterday! 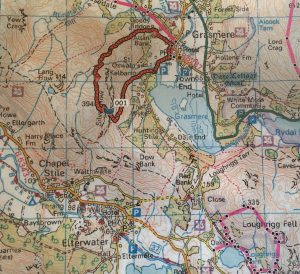 WEATHER: Beautiful weather which just got better!  Warm and cloudy to begin with then glorious weather with brilliant blue skies.

Allan Bank is about a ten minute walk from the centre of Grasmere.

Silver How – our goal for today.

Mila with the cottages beside Allan Bank behind.  The fells in the background are Seat Sandal and Stone Arthur (Arthur’s Chair) on the far right.

Stone Arthur (sometimes the summit is referred to as Arthur’s Chair) with its distinctive ‘V’ shaped summit.  Stone Arthur is really just a rocky end of a short projection from Great Rigg and the main Fairfield ridge but its distinctive summit says Wainwright, gives it the status of a separate fell.

Heading towards the slopes of Silver How.

Helm Crag with the flat summit of Seat Sandal just under the clouds.

Further to the right again with, left to right: Seat Sandal; Fairfield; Stone Arthur; and more of the Fairfield Horseshoe with Great Rigg and Heron Pike being visible.

Stone Arthur with the village of Grasmere below.

We followed the path to Silver Howe (spelt ‘Silver How’ on the OS map) – a lovely gentle walk; perfect after our mammoth walk up Blencathra yesterday.

Through the gap between the walls – not as hot as it was yesterday but it soon got hotter!  We’re heading above the intake wall and onto the final pull up to Silver How.

Having shred a few layers as the temperature increases it’s onwards and upwards.

It’s not long before we can look down on the village of Grasmere.  There are lots of different routes on Silver How that I’d love to explore another day.

The slopes of Helm Crag then the very pale fells beyond are: Helvellyn Lower Man; Helvellyn Nethermost Pike then the darker fell on the left is Seat Sandal with the dip being Grisedale Hause; Fairfield; Great Rigg and Stone Arthur (not as obvious from this angle but on the right of the photograph where the path sweeps from the left round to the right and there’s Stone Arthur).

Now we can see Grasmere Lake.  On the left you have Nab Scar then in the distance you can just see a glimpse of Rydal Water with Wansfell Pike beyond.  Loughrigg is centre to right beyond Grasmere Lake.

Now we can see the first half of the Fairfield Horseshoe, rising up from the lake we have: Nab Scar; Heron Pike; Great Rigg (leading down to Stone Arthur); and Fairfield on the left.

The path climbs initially with a wall on the left and rises through the juniper bushes.  When the path forked we took the path to the left to Wray Gill – crossing the gill can be difficult when it’s in spate but today, as you can see, it was no problem.  The path on the right wanders onto the ridge under Lang How – we’ll have to go that way next time.

It’s not long before we can look down on Wray Gill that we just crossed – excuse the blurry photo!

Mila with Wray Gill out on sight in the ravine below.

The beautiful lonely rowan tree in the centre of the photograph with Fairfield on the far left then Great Rigg (leading down to Stone Arthur) and Heron Pike with the village of Grasmere just visible.

The views are so beautiful . . . I always take too many photographs in the vain hope of capturing the beauty of the scenery and give me a reminder of the fells when I’m home – far away from any hills!

Here left to right: Steel Fell, it looks like it’s part of the fell in front – Gibson Knott which leads along the ridge to Helm Crag.  Behind is the Helvellyn range then Seat Sandal (with the ridge down leading to Stone Arthur); the dip being Grisedale Hause leading to Fairfield.

There’s Loughrigg ahead with Wansfell Pike beyond.  Grasmere Lake and Rydal beyond with Windermere in the far distance and Claife Height on the right.

What a spectacular view!

Steel Fell behind Mila . . . she’s really feeling the heat now.  Then to the right of Mila is the Helvellyn Ridge of Helvellyn Lower Man; Helvellyn; Nethermost Pike; Dollywaggon Pike (Seat Sandal would be further to the right).  You can’t really distinguish it in the above photograph but between Steel Fell and the Helvellyn range is the northern fell of Blencathra.

Lang How on the left of the photograph and beyond there, out of sight, is Bowfell and the Langdale Pikes.

It’s a glorious view and the clouds of earlier are quickly disappearing.

Mila at the summit cairn.

Grasmere and Rydal Water beyond.

The summit cairn on Silver How!

Views across to Crinkle Crags; Bowfell and the Langdale Pikes.

The Langdale Pikes in the centre with Sergeant Man just visible as a small bump to the right.

Looking towards the Coniston Fells of  Wetherlam; Swirl How; Great Carrs in the distance with the heather covered Lingmoor Fell in front.  Further to the left is Pike o’ Blisco just right of centre, then Crinkle Crags; Bowfell and the Langdale Pikes on the far right.

Looking south, left to right beyond the cairn: Holme Fell; then after the dip Tilberthwaite; the Coniston Fells of Wetherlam; Swirl How and Great Carrs with Lingmoor Fell in front, covered with heather.

Grasmere Lake with its one larger island known as ‘The Island’ (or ‘Rawnsley Island’) was finally  gifted to the National Trust in the last owner’s will (stipulating that she did not want to be recognised for her generosity) after she realised how much it meant to the founders of the trust and came into their hands in 2017.  It was said to be the poet William Wordsworth’s favourite destination while he was staying at nearby Dove Cottage and when he lived at Allan Bank from 1808-1811.

In fact it was the sale of this island to a private bidder in 1893 which inspired Canon Hardwick Rawnsley along with two others to set up the National Trust having had their first official meeting in 1893 they then set up the trust in 1895 as they felt such places should be in public ownership.  The island is a perfect haven for wildlife with a heronry consisting of four nests that have established there due to the lack of human disturbance.  The National Trust website tells us that there’s a magnificent ‘medusa like’ old oak tree on the island which has become surrounded by younger trees and now that the island is looked after by the trust they can ensure that the old tree is given more space to allow the wildlife to flourish even more!  Rydal Water is beyond with two smaller islands and Loughrigg Fell and Wansfell Pike beyond.  To the left of Wansfell Pike is Buck Crag and Sallows.

A fuller panorama with Wansfell Pike beyond Loughrigg Fell.

Lake Windermere with Claife Heights in the centre.

The view of Loughrigg Fell from Silver How. If you look very carefully you can see five stretches of water in the photograph above: Grasmere Lake on the left and Rydal Water beyond then in the distance is Windermere Lake.  On the other side of Loughrigg barely visible is Loughrigg Tarn then finally Elterwater.

Windermere far left and Elter Water with Black Fell beyond and the Coniston Fells on the far right.  Right in the centre of the photograph you can just about see the slate quarries of Elterwater.  They produce a lighter coloured green slate than the Honister mines.

Looking across you have Steel Fell on the left then the Helvellyn range: Helvellyn Lower Man; Helvellyn; Nethermost Pike; Dollywaggon Pike – with Seat Sandal in front.

Mila with Great Rigg in the background and Grasmere village below.

I’m not sure that’s the right way Mila?

This photograph shows the route we took . . .

As we head down Silver How there’s Spedding Crag and Dow Bank ahead leading to Loughrigg Fell straight ahead.

Mila as ‘fell runner’ heading down at quite a lick!

Following the engineered path down.

Following the path just visible to the right of the wall.

A quick look back at the route we’ve just come down.

The wall now on the right hand side of the path.

Almost down and Mila still looks as fresh as a daisy!

Mila doesn’t stop for long before she’s off again, running down the final stretch . . . she’ll wait for me at the bottom.

Yes, that’s the way, through the kissing gate at the bottom.

I was surprised by how much felling was going on  . . . I wonder where all the wood will end up.

Along the path and through the gate at the end.

Down the path to the road at the end and then left and back into Grasmere.

The path comes out right opposite ‘Fairyland’ – somewhere I’d like to visit another time.

A short walk back into the village.

Past our first view of Allan Bank, Wordsworth’s former home.

A lovely cafe in the centre of Grasmere.

What about this for a cup of tea . . . the delicately flavoured rose petal tea.

Before walking back to the car we walk past the path to Allan Bank by the side of The Miller Howe Cafe where we started our walk this morning on our way to view the art exhibition of local artists – always worth a visit!

As we walk towards the exhibition there’s Stone Arthur ahead of us.

. . . and in the other direction Silver How.

The Lake Artists Society Summer Exhibition is always fascinating and Mila still enjoys doing the quiz as we walk around, identifying small sections of paintings and sculptures taken from the originals.

Before long it’s time to return to the car and go back to the cottage and tell Pal all about our lovely day out on Silver How!