A great little walk despite the very disappointing weather . . . though as we had the right gear we were all warm and dry despite the pouring rain!  On a bright day the views would be impressive . . . you’re just going to have to use your imagination today. 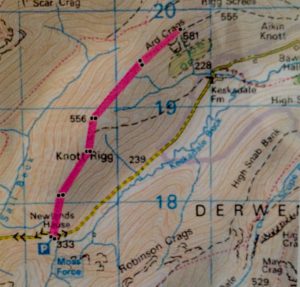 WEATHER: Torrential rain – though it started to ease as we made our way back to the car!

As you can see we had a hopeful start to the walk as the rain had stopped temporarily allowing us to get our boots on  – a wise idea to wear gaiters today . . . you’ll see why as the walk progresses.  The parking spot is at Newlands Hause (though it’s commonly mistakenly referred to as Buttermere Hause).

The walk started off cool and drizzly but soon turned to heavy rain.  The photograph above shows the fells behind the car parking area – opposite Knott Rigg and Ard Crags.  The fells here are Robinson starting to disappear under cloud; then Robinson Crags; the waterfall – Moss Force then High Snorkrigg just out of sight on the right.

All kitted out for the bad weather soon to come . . . We’re just heading up from the car park.  The small wooden footpath signpost at the bottom directs you up to this path which leads along the ridge of Knott Rigg and Ard Crags.  Unfortunately the sign makers have mixed up their summit names . . . the first summit is Knott Rigg at 1.5 miles and Ard Crags, at the other end, is almost double that distance.

Moss Force in the background . . . It’s a shame the rain is pouring now and visibility is deteriorating.

There’s the ‘Keswick to Buttermere’ road way below us.  Almost lost under the dark clouds you can see the outline of Catbells in the distance.  The more visible fell in the centre of the photograph is Scope End leading to High Crags then Hindscarth lost in cloud with the slopes of Robinson in front.

It’s a pretty steep ascent . . . but not as tricky as it perhaps looks, though fairly slippery because of the heavy rain.

Looking back towards Knott Rigg, the way we’ve walked with Moss Force on the left of the photograph.

Time for a brew.  You can see all the rain on Pal’s jacket, it was raining incessantly now and unsurprisingly we only saw two other walkers!

Left to right you have Sail and Sail Pass then Scarr Crags; Ard Crags and immediately behind you can see the distinctive bobbly summit of Causey Pike; Rowling End and the pale area is Derwent Water with Catbells to the right of it and the Newlands Valley in front.

A close up of the photograph above looking across the Newlands Valley.

Sail Fell is on the left with Scar Crags the dark fell in the centre of the photograph.  If you look very carefully along the righthand slope of Scar Crags you can just see the summit of Skiddaw Little Man peaking above the ridge.  The ridge from Scar Crags leads to Causey Pike.  Ahead of us along the path is Knott Rigg and Ard Crags is just below the summit of Causey Pike.

Knott Rigg and Ard Crag form a thin elongated fell ridge sandwiched between the impressive giants of Robinson on one side – to the right of this photograph; and the Grasmoor group on the left – its views should be superb!

Looking back towards Knott Rigg.

Knott Rigg behind Pal and Mila with high Snockrigg beyond.  Unfortunately the weather wasn’t letting up so the views were disappointingly poor, we’ll definitely have to do this walk again in better weather.

On a bright day the views would be spectacular.

Still time for a chat despite the weather.

Mila sheltering in front of Pal trying to keep out of the rain with Moss Force waterfall on the left.

Still smiling despite the weather.

Heading back down to the car now . . . Mila racing ahead with the slopes of Whiteless Pike on the right.

Pal taking it easy on the descent as all the rain has made it very slippery.

There are a few more cars parked down there now.

The road below is the Newlands Pass down to Buttermere and if you look very carefully on the right you can just see Crummock Water with the slope on the right leading to Whiteless Pike. The fells of Knott Rigg and Ard Crags really are sandwiched between the larger fells on either side.

There’s the car, not far to go and a great walk despite the weather.

A wider panorama of the scene.