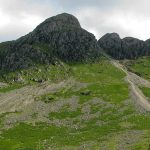 Looking across the Langdale Valley from Esk Hause you get the spectacular view of the Langdale Pikes with their distinctive outline.  There’s the flat-topped Harrison Stickle, then the beautifully rounded Pike o’ Stickle followed by last summit of Loft Crag – the clouds look ominous – let’s hope they’re not coming this way! 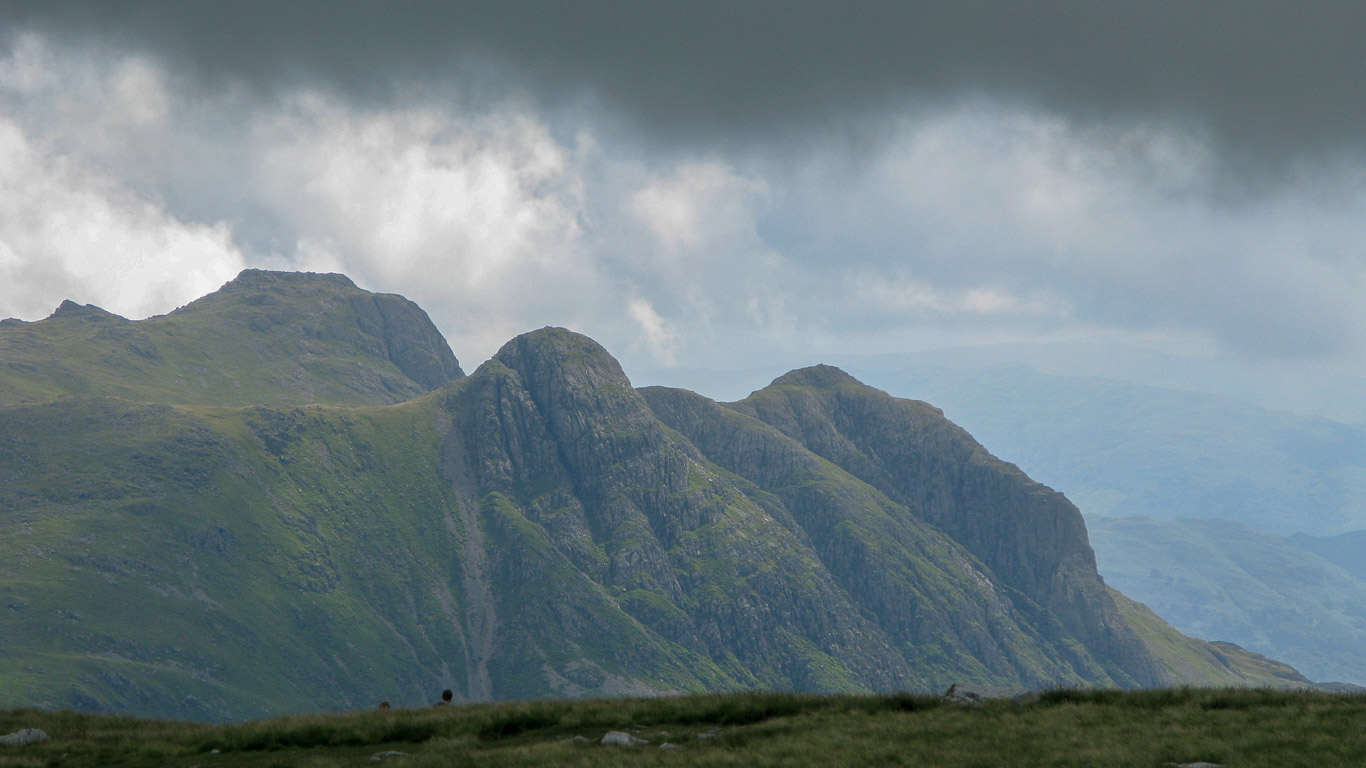 The Langdale Pikes on the right of the photograph (photo taken from Loughrigg Fell) with Loughrigg Tarn in the foreground.

Left to right: Lingmoor Fell, behind which is the snow-capped summits of Pike o’ Blisco; Crinkle Crags; Bowfell and Esk Pike.  Then the rounded summit of Great End. The Langdale Pikes from the centre of the photo are Loft Crag; Pike o’ Stickle; Harrison Stickle; Pavey Ark and the triangular summit of Sergeant Man just visible. 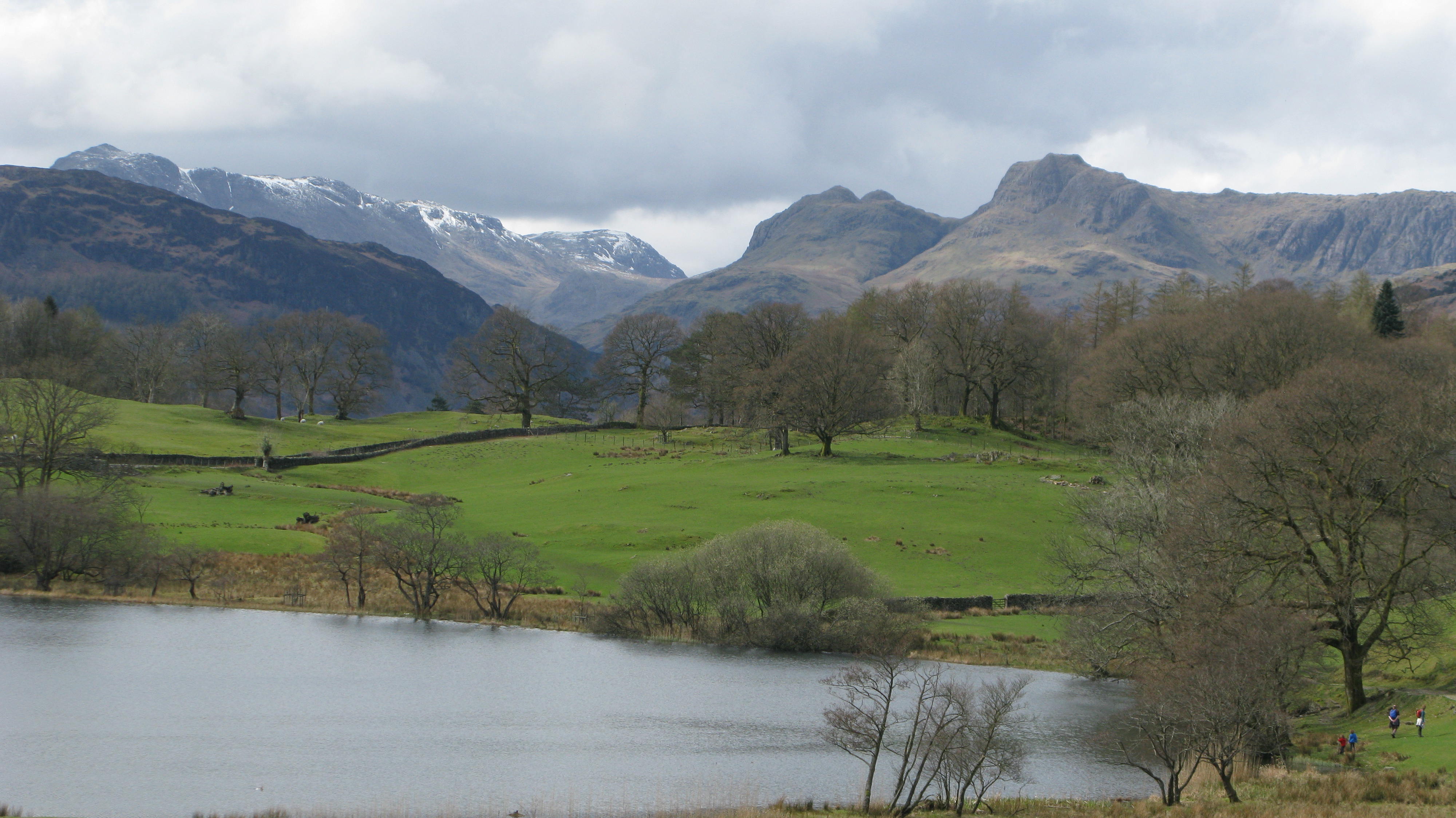 Pike o’Stickle on the left with Loft Crag on the right of the photo which was taken from the Mickleden Valley.

The Langdale Pikes rise majestically rise from the Mickleden valley . . . Here you can see the distinctive shape of Pike o’Stickle (on the left ‘Pike’ meaning ‘peak’ and ‘Stickle’ meaning ‘steep’).  This photo shows the south scree from Mickleden, anyone interested in archaeology may be interested in Wainwright’s comments (in Pike o’Stickle 3 & 5) that you can clearly see “the intrusion of a narrow vein of a very hard stone in the volcanic rocks of Great Langdale, emerging on the surface along the high level contours around the head of the valley, providing the material from which the prehistoric natives of the district fashioned their axes.  Working sites have been located from Martcrag Moor to Harrison Stickle” [the route we will be walking today] . . . but the screes of Pike o’ Stickle have yielded the most prolific discoveries and especially the south scree where hundreds of specimens, originally rejected because of imperfections, have been collected in recent years. “In the rock wall of the south scree, is a well-made artificial cave.  Its connection with stone axe manufacture hereabout has not yet been established as authoritative although the coincidence seems too great to be denied. A few feet square, it provides excellent shelter for several persons.  On the right of the photo you can see Loft Crag. 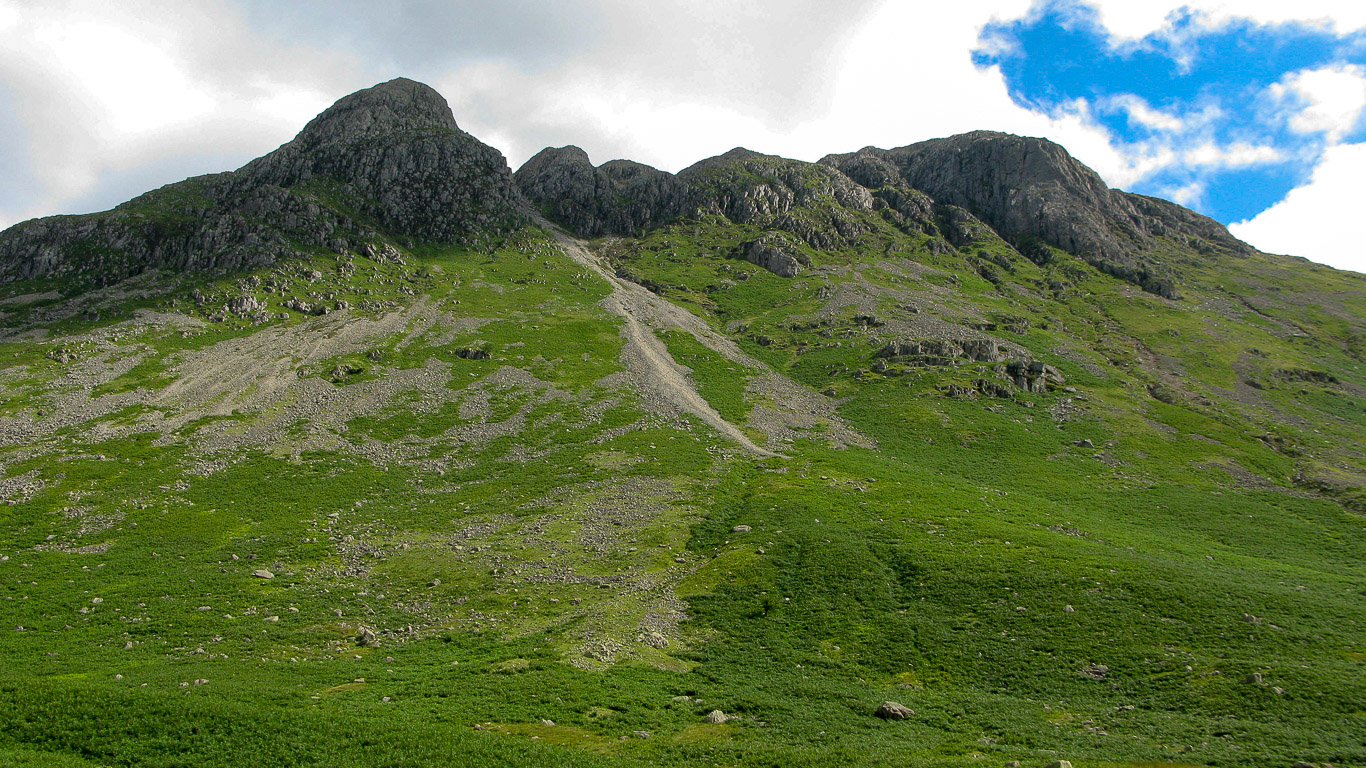 Pike o’ Stickle from our walk including the Langdale Pikes. 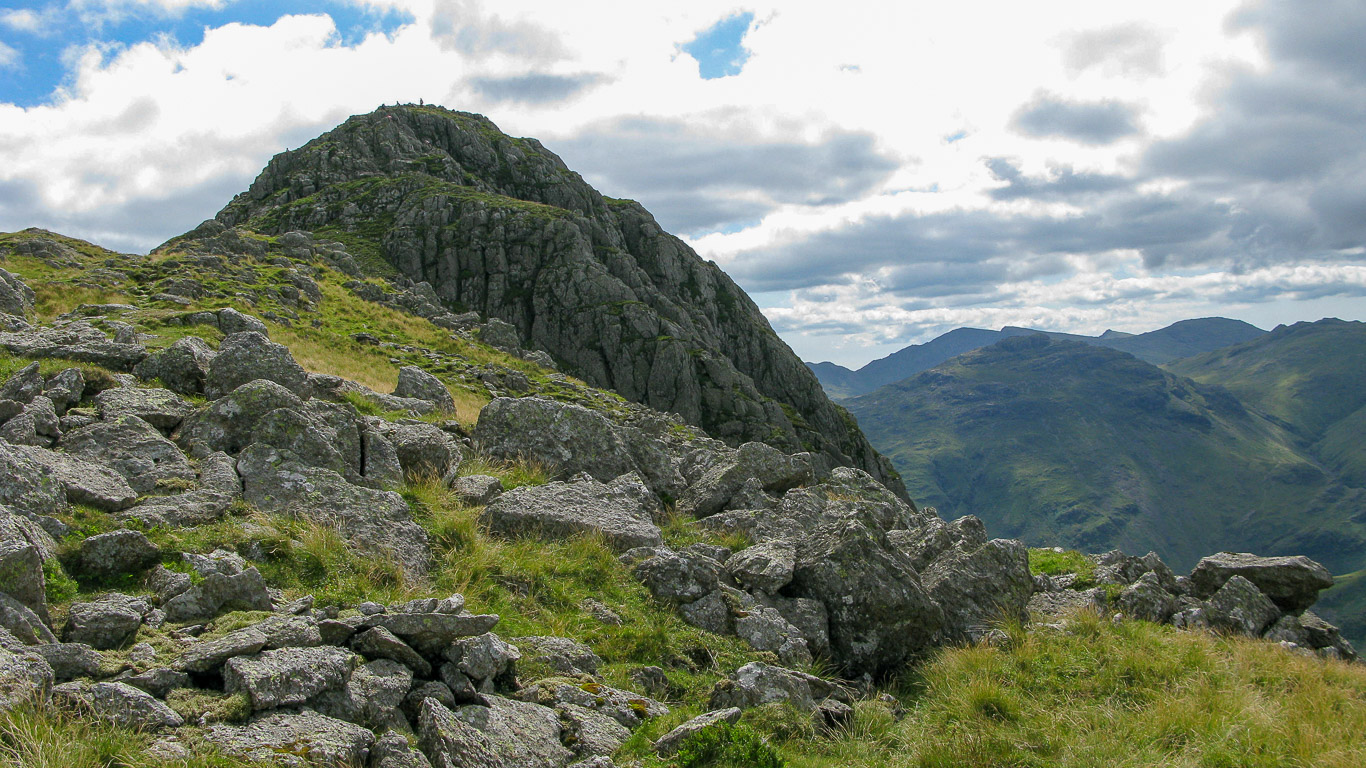 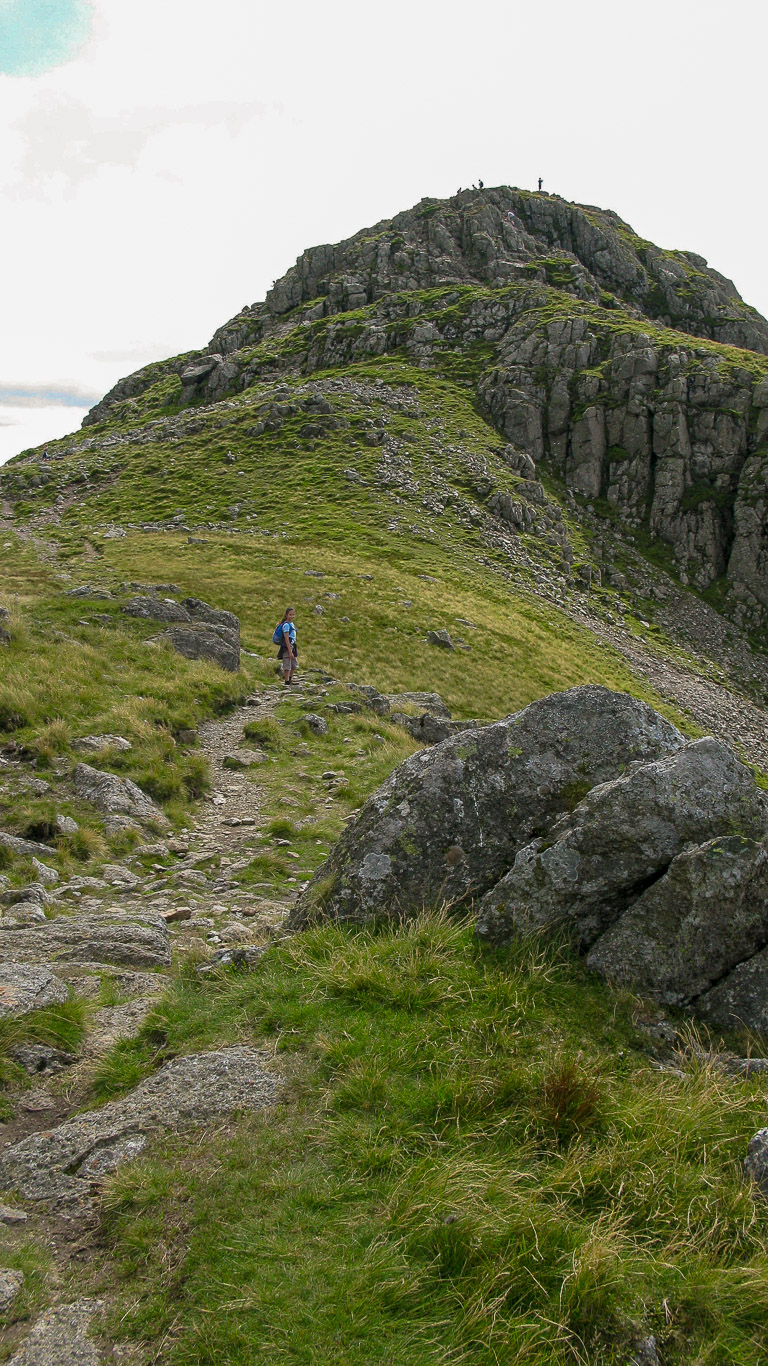 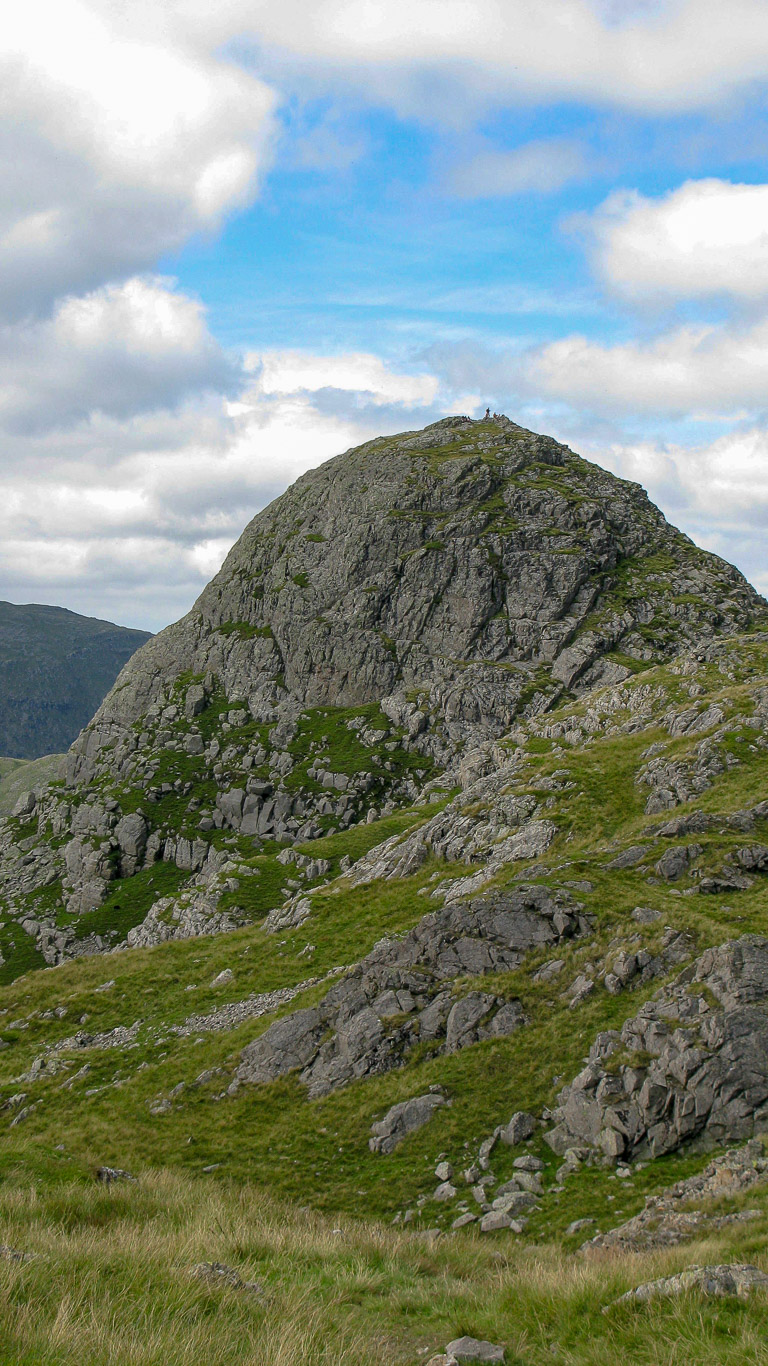 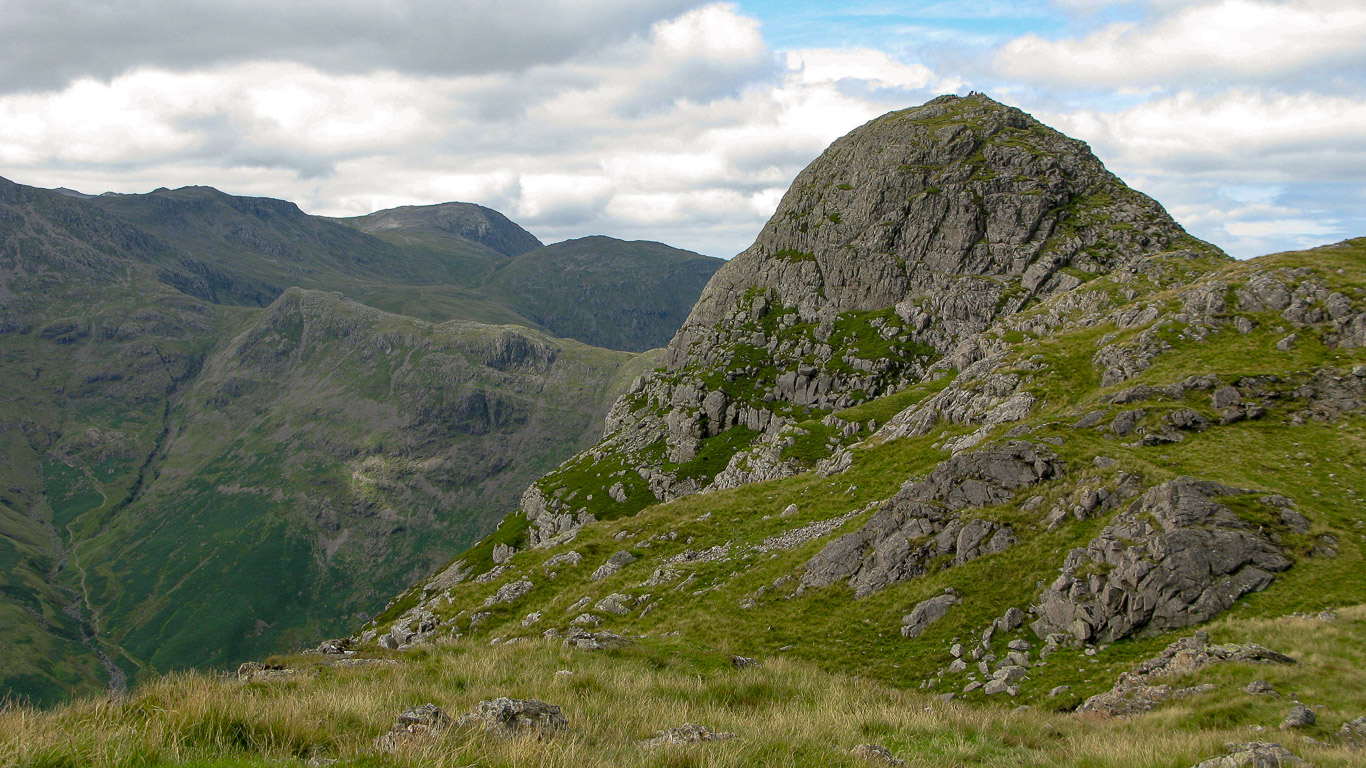