A famous waterfall, bagging a Wainwright fell and visiting ‘The Puzzling Place’ in Keswick all with great company – a wonderful way to spend the day!

The fell and the area around Aira Force (750 acres) was bought by the National Trust in 1906 and when I researched I also discovered that the area was landscaped as a Victorian park and Gowbarrow Fell was formally a medieval deer park though the deers have since been replaced by low numbers of hardy, traditional sheep such as Herdwick which will help with the restoration of heather and tree cover to the fell.

When we visited Gowbarrow Fell it was really quiet compared to the area around the waterfall and the rather bleak rock-punctuated moorland dotted with gnarled oak trees was gloriously carpeted by purple heather.  In the 13th century the fell was named, ‘Golberry’ and ‘Golebergh’. The name is said to be a translation of the Old Norse words, ‘gol’ meaning ‘Windy Hill’ and ‘berg’ meaning ‘Rocky Hill.’

WEATHER: Very mixed!  Cool to begin with but got warmer as the walk progressed.

Having left the National Trust carpark through a gate at its northern end you come to an information panel in a grassy area is known as the Glade nearby are an impressive array of specimen trees.

Mila, our little photographer, checking out the camera – looking like she is sitting on the clawed foot of some huge mythical creature . . .

. . . It is in fact a huge Monkey Puzzle tree!  The wrinkled bark looks like melted wax the way the outer bark seems to have slipped or melted down the outside of the trunk to create intriguing folds on this ancient Monkey Puzzle tree . . . The Howard family landscaped the park during the 19th Century and along with building bridges and paths around Aira Force planted over half a million trees including (in 1846) 250 specialist trees – part of an old arboretum (a botanical garden devoted to trees).

In the spring – Gowbarrow Park is definitely worth a visit to see the daffodils that inspired the poet Wordsworth to write his poem “I wandered lonely as a cloud” – often known as Daffodils. The details of his inspiration were recorded by his sister Dorothy in her Grasmere Journal.  She records how they walked through the park at Gowbarrow on 15th April 1802 where she was captivated by the daffodils growing on the west side of Gowbarrow beside the shore in Glencoyne Bay.  Dorothy wrote,

It’s not before we get our first magnificent views of the spectacular Aira Force waterfalls – here seen cascading 20 meters (65 feet) in a thunderous roar down the ravine.

Pal and Mila just before we go down the steps to the viewing platform.

It was surprisingly quiet down the long steep flight of steps to the upper viewing platform.

The power of the waterfall becomes more impressive the closer you get.

There’s me from the upper viewing platform before we descend right down to the base of the waterfall.

Thanks to our little photographer, Mila, there’s a photograph of Pal and I!

Because of the recent rain the drama of the waterfalls is impressive.  The name ‘Aira’ is derived from Old Norse, ‘err’, a gravel bank and Old Norse ‘a’ meaning a river therefore – ‘The river at the gravel bank’ – a reference to Aira Point (which you can see on a later photograph where you can see Aira Point as the tip of a triangular piece of land jutting out into the waters of Ullswater) – a gravelly spit where the river enters Ullswater.

(Spit (or sandspit) is a geographical term meaning ‘an extended stretch of beach material that projects out to the sea (or in this case a lake) and is joined to the mainland at one end.  Spits are formed where the prevailing wind blows at an angle to the coastline (lakeshore here), resulting in longshore drift’ – definition from GCSE Bitesize Geography!)

Pal and Mila on the bridge.

Mila has just discovered the art of the selfie . . . and that crazy thing she likes to do with her hair!

Leaving Aira Force behind we follow the path up stream coming to a footbridge over Aira Beck.

Here’s the view from the footbridge – Aira Beck with High Force – the much smaller waterfall –  just downstream of here out of view!

There’s none of the drama at this point but still beautiful with the gentle gurgling and splashing of the water as it squeezes its way between the rocks on its route down to the grand waterfall further downstream.

Mila’s gone selfie mad . . . and what’s with the crazy hair?  You’re supposed to be taking views from the bridge!

The footbridge over Aira Beck . . .

Aira Beck from the footbridge looking up the beck this time.

Building up power as it descends . . .

Mila being a cheeky monkey!  Continuing on the footpath through the oak woodland past the higher waterfall of High Force the path proceeds through a gap in the wall sign-posted ‘Farmland Public Footpath to Dockray and Ulcat Row’ – which you can just see in the background.  We saw very few walkers on the fell itself.  Now we were out onto the open farmland and bracken heath.

The views soon opening out and our first views of Ullswater looking south towards Glenridding.

There’s the slopes of Birk Fell, on the left, stretching out into the lake; beyond is Place Fell then Little Hart Crag and Dove Crag with Hartsop Above How in front.  In  the centre of the photo at the back it’s Hart Crag wth Birks in front leading up to the right of the photo with St Sunday Crag and Fairfield beyond its summit misted in cloud.

Looking back – we’ve walked up the fell keeping the stone wall on our left following the path.  The stone wall (as well as old shooting boxes and stalkers’ huts) are remains of former deer hunting!

Once the path levels out it bears away from the wall – simply follow the path to the summit trig point on Gowbarrow fell.

The annotated view of the scene below is taken from the Lakeland Fellrangers series ‘The Near Eastern Fells’ by Mark Richards (Pub. Cicerone).

Mila heading up towards the summit . . .

Here’s a better close-up of the fells looking south . . .

The main fells here are: Dove Crag; Hart Crag; St. Sunday Crag and Fairfield beyond with Ullswater in the foreground.

As the slopes gradually change from bracken to this thick carpet of heather . . . there’s the summit ahead . . . marked with the Gowbarrow Fell Trig Point.

Once again Ullswater comes back into view . . .with Arthur’s Pike; Bonscale Pike and Loadpot Hill beyond.  Their are wisps of cloud above Hallin Fell.

There’s Hallin Fell on the right of the photograph and beyond Ullswater in the centre of the photo is Bonscale Pike.

Mila is definitely the ‘King of the Castle’!

Mila taking a breather as we descend to the viewing point  at Yew Crag.

The cairn above Yew Crag . . . Sandwick and Martingale Fells.

The viewpoint cairn above Yew Crag with Hallin Fell beyond Ullswater on the right with Arthur’s Pike; Bonscale Pike; and Loadpot Hill.

Here you can see Aira Point (the triangle of land) jutting into Ullswater and barely visible among the trees just before it is Lyulph’s Tower.   Lyulph’s Tower was built in the 1780s by Charles Howard, the 11th Duke of Norfolk, as a hunting lodge.  Interestingly the name comes from Lyulph, a viking settler who is said to have given his name to Ulph’s Water which is now known as Ullswater.

The lone tree blown sideways by the prevailing wind.

Hallin Fell on the right beyond Ullswater. 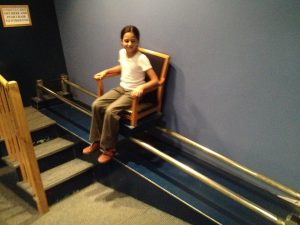 In the afternoon, to avoid the heavy rain we decided to visit ‘The Puzzling Place’ in Keswick.  Surprisingly we had never visited before and we were all really surprised by how much fun we had! (Please excuse the quality of the photographs as they were taken on our phones but it seemed a shame not to include them).  It’s all about optical illusions which were incredibly effective – we thoroughly enjoyed ourselves.