Mmh!  How should the fell be named? Wikipedia calls it ‘Cat Bells’, it’s also two words on Ordnance maps, but I’ll stick to Wainwright’s version of the name ‘Catbells’! 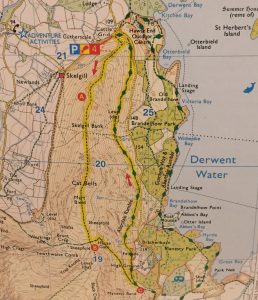 PARKING: Hawes End – It’s a small parking area 200 yards along the narrow lane sign posted Skelgill, 2 miles south of Portinscale, above the north-west shore of Derwent Water.  This is an extremely popular spot so get there early. (NY247 212)

WALK DETAILS: 3.5 miles (5.6km) c. 2 hours.  We had chosen a walk from the ‘Pathfinder Guides Lake District Walks Catbells (the photo of the route opposite is taken from the book).

WEATHER: Very mixed!  We had the weather for every season – all in one day.  On the exposed summit it hailed very heavily, lashing down and was surprisingly scary at some points on top as it was so windy; I worried that Mila would be blown off, she was wonderfully considerate worrying about me being blown off.  Once we had started to descend all was tranquility once more and the sun came out.  It felt like a completely different day!

The name ‘Catbells’ may come from a corruption of ‘cat bields’ meaning a wild cat’s shelter dating back to a time when wild cats still roamed the countryside.

In Book 6 ‘The North Western Fells’ Wainwright opens his chapter on Catbells with a wonderful yet rather optimistic comment on how accessible Catbells is to climb.  This is the second time we’ve completed this walk.  The first time was when Mila was just four and she climbed it without a problem, but the weather can make all the difference in the world and I certainly couldn’t imagine the grandparents managing to climb it!  Here is what Wainwright wrote, “Catbells is one of the great favourites, a family fell where grandmothers and infants can climb the heights together, a place beloved.  It’s popularity is well deserved; its shapely topknot attracts the eye, offering steep but obviously simple scramble . . . “

Do you think Mila is wrapped up enough against the element . . . notice the change by the end of the walk!

I always like to start our walks quite early as I worry about parking! – But it also means that we can enjoy a very popular walk like this one without it being too busy.  Here we’ve just parked up and are just about to start up the footpath towards Catbells.

Pal and Mila near the start of the walk – just about to walk up Skelgill Bank, the lower half of Catbells.

Today’s photographs are a mixture of my photos and Mila’s photos – she took some great pictures!

Looming grey clouds, giving no hint of the ferociousness of the wind on the ridge!  There’s Causey Pike on the left, Rowling End leading up to the summit of Causey Pike with it’s very recognisable ‘bobble’ summit; Outerside and Barrow on the right.

As we head up Skelgill Bank Derwent Water comes into view with the small fell of Latrigg beyond Keswick and the Northern Fells beyond, the summit of Blencathra on the right of Latrigg lost under cloud.

Looking towards the east there’s St Herbert’s Island with Walla Crag and Bleaberry Fell beyond.  St Herbert’s Island is the largest of the islands and is named after the man who brought Christianity to the area in 685 AD.  He used the island as a hermitage and after his death the island became a place of pilgrimage and supposedly St. Herbert’s cell can still be identified amongst the undergrowth (so I’m told by the National Trust in it’s information about the islands on Derwent Water).  “St Herbert’s is also the inspiration for the fictional Owl Island in Beatrix Potter’s ‘The Tale of Squirrel Nutkin’, so be sure to keep your eyes open for any little rafts pulled up along the shore!”

A panorama of the whole scene.

There’s the Newlands Valley with Barrow; Lord’s Seat and Barf on the left and a glimpse of Bassenthwaite Lake in the background and the wooded Swinside in the foreground and the Northern Fells on the right.

There’s Pal and Mila, all wrapped up against the weather as they head up the engineered route up Skelgill Bank.

Happy faces enjoying a walk Mila first did when she was only four; but a very different walk today because of the strength of the wind on the summit . . . quite scary!

Shadows casting dramatic shapes on Causey Pike and Barrow with Outerside beyond and The darkest fell with clouds covering its summit being Grisedale Fell just right of centre.

Pal and Mila before the final pull up to the summit of Catbells . . . with no indication yet of just how windy the summit would be!

The lush green summit of Catbells surprisingly quiet for such a popular fell with Maiden Moor beyond.

That’s me, bent against the immense strength of the wind and it got stronger as we got higher.

Mila and I taking a little breather at the top of Skelgill Bank before we climb the final section to the summit.

Picture postcard beautiful with Catbells summit ahead and then to the right you have the ridge leading to Maiden Moor; Dale Head and Hindscarth.

Looking south to west you can see Hindscarth; Robinson then Knott Rigg and Ard Crags on the right.

Probably because of the weather there’s not a soul in sight on this usually very popular fell.

The central fells in this photograph are Knott Rigg and further along the ridge to Ard Crags.

Another photograph of Grisedale Fell with Barrow in front and then Lord’s Fell and Barf leading down to Bassenthwaite Lake with the Northern fell of Binsey and the slopes of Dodd and Ullock Pike on the right.

The Northern Fells with the summit of Skiddaw lost under cloud.

Walla Crag and Bleaberry Fell – covered in heather though that’s not clear in the photograph.

Grange Fell at the eastern end of Derwent Water with it’s three main summits Ether Knott; Brund Fell and the popular viewing point of King’s How (the triangular dark green part of the fell on the right).

Ominous looking black clouds over the summit of Catbells . . . not far till the summit . . .

Pal and Mila just before the final scramble up to the summit.

Pal and Mila on the summit.

Looking south: Maiden Moor; Dale Head (with the summit hidden); Hindscarth and the slopes of Robinson.

Mila is the ‘King of the Castle’ – on the rocky summit of Catbells.

Protection against the very severe wind on the summit and now it’s beginning to rain . . . but we’re still smiling and we’re on our way down.

Do you think Mila is wrapped up enough?

Another photo of Walla Crag and Bleaberry Fell as we descend Catbells.

I don’t think Mila is quite as tired as she looks here . . .

Mila’s always dancing and doing cartwheels . . . even in the carpark at Ambleside!

Pal was disappointed that the ‘Home of Football’ museum no longer exists (it closed in 2011) but Mila rather liked this huge cuddly Marmot in the Marmot shop that’s taken it’s place . . . then it was off to get a well earned tea and cake for us all!