With mixed weather forecast for today it seemed like a good idea to ‘bag’ some easier fells . . . in fact we decided to walk Sale Fell and Ling Fell as they’re close to each other but independent so if the weather took a real turn for the worse we could easily choose just one of them and leave the other to another day . . . luckily the rain showers were intermingled with sunny spells so we were happy to extend the walk Sale Fell to Ling Fell both of which are fairly easy fells to walk. 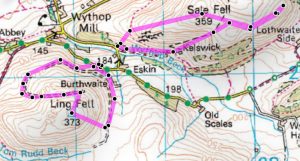 Mila looking back at me as we make a start up the farm road.

Looking back down the way we’ve walked you can see Ling Fell on the opposite side of Wythop Valley on the left which we’ll walk after enjoying our walk up Sale Fell first.

As the road turns to approach the farm entrance we should have taken a left onto the fell track . . . but with my great navigational skills (mmh!) we continued on to the farm before retracing our steps . . .

Pal and Mila already having a rest . . . do you think they could be a little bit exasperated with me being unclear as to our route especially as we’ve barely started walking?!  Next time though it would be a good idea to follow the path on the right in the photograph which would take us on towards Chapel Woods then through the woods before walking up towards Wythop Woods and taking the slope up towards the summit of Lothwaite . . . so we could have gone that way instead!

There you go . . . the turn off is now on our right . . pretty obvious . . . you don’t need to tell me!  We decided to walk the route in an anti-clockwise direction.

The track goes up past the back of the farm buildings so maybe I can be excused for my earlier navigational errors as technically I was heading in the right direction there just wasn’t a route through the farm to this path.

It’s a great time of year with many plants in bloom like the yellow flowers on the gorse bush which make me think of little drops of sunshine (needed today with the mixed weather we’re having – though I’m not complaining as the rain ensures the beauty of the landscape).  Just wait till you see the vast swathes of heather that we’ll see shortly, truly spectacular and that’s before we even get talking about the views.

The line of Scots Pines in Fisher Wood look quite distinctive with their foliage all heading in one direction – is that because of the direction of the sun shining on the trees and the prevailing winds? . . . I really wish I knew more about such things.

Looking back towards the farm buildings you can see Ling Fell on the right of the photograph with Kirk Fell and Graystones just to its left then I think it’s Broom Fell which continues along the ridge to Lord’s Seat.

A close up focusing on Ling Fell . . . to be walked later on today!

A straight forward walk up the grassy track.

Mila’s obviously feeling the heat now but can’t quite be bothered to take off her rucksack so she can take off her jacket!  We cut through between the walls at this point and head towards Lothwaite leaving the summit of Sale till later.  In front of Pal you can see the solitary Northern Fell of Binsey.

From the top of the track we can see Lothwaite Hill on the left looking rather naked having had all its trees cut down.

Taking in a wider panorama you can see Lothwaite Hill on the left and Lothwaite (subsidiary ridge) in the centre with what can be seen of of the Skiddaw massif beyond – unfortunately the low cloud and generally hazy conditions prevents me getting any good photos of the view!  The only fell of the Skiddaw massif not under cloud is the dark outline of Dodd on the right.

There’s the dark outline of Dodd on the left and the grassy pastures of Sale in the distance.  Here we’re looking back and you can just see the walls we walked between earlier.

A pile of stones marks the summit of Rivings on Lothwaite with Ling Fell in the background behind.

A wider panorama this time taking in Rivings and the summit of Sale Fell across the grassy pasture.  If I’d taken the photo from a different direction I would have been able to see Helvellyn and Brown Cove Crags . . . but the weather isn’t great for capturing distant fells today . . . you can just see the slight path we followed if you look carefully.

From Rivings the route continues on to Lothwaite ahead following the wide grassy path.

Heading towards Lothwaite (subsidiary ridge) with the valley of Derwent and Bassenthwaite Lake below but unseen.  This should have been a great view looking north towards Skiddaw and the surrounding fells, but the low cloud has hidden the summits with only the lower summit of Dodd being recognisable   . . . we’ll definitely have to come again!

Soon it will be time to retrace our steps and head for the summit of Sale Fell beyond the wall . . . you can just see the gap in the wall that we came through on our way here . . . but first . . .

. . . let’s take some photos from Lothwaite over Bassenthwaite Lake to the little we can see of Skiddaw and Dodd.  Pal and Mila near the memorial bench on Lothwaite with Dodd (behind Pal’s head) and you should be able to see the Helvellyn range in the far distance then the wooded area on the right is Ladies Table with Lord’s Seat almost visible on the right of the photo.  As you can see the bench is the perfect spot for a potentially fantastic view . . . just a shame about the clouds and hazy atmosphere.  On a clear day the views would be incredible.

Father and daughter . . . don’t they make a lovely photograph.

A view down the length of Bassenthwaite Lake.  Did you know that Bassenthwaite is the only ‘Lake’ in the Lake District . . . all the others are known as ‘meres’ or ‘waters’ . . . always useful for a pub quiz!  Beyond the lake is Skiddaw, Ullock Pike and Dodd the only summit not under cloud.

Looking down the lake you can just glimpse Keswick and to the south of Keswick is Derwent Water with the Helvellyn range unfortunately invisible here because of the low cloud and general haziness then Walla Crag, Bleaberry Fell and High Seat.

Now looking towards the northern head of Bassenthwaite Lake are the Back o’Skiddaw Fells . . .  Longlands Fell; Brae Fell; Great Cockup and Knott (though none are clearly discernible) and then Broad End (Skiddaw) towards the right of the photo.

It’s very windy up here, Pal and Mila just taking in the views.  On the left you can see the solitary detached Northern Fell of Binsey.

A close up of Binsey, the northernmost Wainwright fell, a perfect fell for an afternoon stroll so I’ve been told.

A clearer view of  the ridge leading to Lord’s Seat on the right of the photo.  The wooded hill on the left is called Ladies Table with the Helvellyn ridge beyond.

Heading back the way we came but now continuing on to the summit of Sale Fell.

The quiet summit of Sale Fell.

Looking towards the north.

The fells looking towards the south – the dark fell on the left is Whiteside then Graystones, Kirk Fell and the dark fells beyond are Low Fell and Fellbarrow with the heather covered Ling Fell in front.  On a clear day you would be able to see the Irish Sea on the horizon to the right of Ling Fell.

Now to find a convenient sheltered spot for a bite of lunch.

Lovely views of the valley.  You can see Embleton, the linear village straddling the A66 main road between Dubwath and Cockermouth which follows the line of the old Penrith, Keswick and Workington railway.

A great sheltered spot just below the summit – perfect for lunch . . . and there’s even convenient stones to sit on and with Ling Fell in the background.

Wind turbines along the Cumbrian Coast on a clear day you would be able see all the way to Scotland from here!

Mila’s just realised that this is only half of today’s walk . . . we’ll soon be heading to that fell behind!

She was only joking!

Pal and I descended down this clear wide grassy path . . .

Almost back to where we started . . . it’s been a circular route.  We ascended by the route ahead but having completed our circuit we’ll take the path down on the right heading back to the tarmac track and then it’ll be a right down the track, through the gate and past the car onto our next fell of the day Ling Fell.

A rather direct route down the fell which Mila would have liked to try, maybe next time though I think it would be easier going up this way rather than down!

It would have been better to take this picture from the other end!  Looking back on Brumstone Bridge which we crossed in order to head up to Ling Fell.

A quick look back at Sale Fell.

From the road west of Eskin Farm, this gate gives access to the Corpse Road path up Ling Fell It’s a short walk from Sale Fell to here, so we didn’t bother to move the car, but just continued down the road and up over the Brunson Bridge then up the road a short way.

Mila decided to go for the most direct route up the fell whereas Pal and I followed the more obvious path . . . well it was obvious for a while before it completely disappeared . . . so maybe Mila had the right idea after all.  Actually, if I remember correctly we returned by the path you can see here at the bottom right of the photo but we ascended by a route to the left (walking in a clockwise direction).

It was quite hard work walking up this steep incline and the heather being all bouncy underfoot made the going tough.  The pointed summit in the distance is I think Broom Fell.

Pal and Mila at the summit trig pillar on Ling Fell.

Here you can see the North Western Fells of  Lord’s Seat and Broom.  With all of these gray clouds we’re lucky not to have had much rain today.

On the summit plateau of Ling Fell . . . a photograph in the other direction should have captured the high fells but the heavy mist was blurring the views – though I shouldn’t be complaining, at least it wasn’t raining!

Thick heather grows in big tufts all across the fell and it seems like August is an ideal time to see it at its best.

Heading down . . . Pal waiting patiently while I photograph the scenery!

The way down is much easier going and zig zags down on fairly clear grassy paths till you meet up with the main Corpse Road path.

The only other walkers we’ve seen on Ling Fell today heading up and you can see the clear broad path we’ve just descended..

The yellow gorse alongside the purples of the heather are quite stunning.

The heather is such a spectacular colour.

Right in the centre of the photograph is Binsey but the low cloud is spoiling the view.

A much easier path for our descent using the Corpse Road path.  There’s Sale Fell ahead with Bassenthwaite on the left.

Heading down the Corpse Road path with Sale Fell and Lothwaite on the left almost down to the base now.

Down the road and back across the bridge and we’re soon back to the car.

Mila finishing the walk with a flourish – very dramatic.  It’s been another day’s great walking with lovely walking companions who luckily are quite patient with my poor navigational abilities and my constant stopping to take photographs – thank you Pal and Mila.