A classic walk today from the head of Haweswater via Rough Crag, High Street and Mardale’s Ill Bell.

The name High Street comes from the fact that the Romans, known for their ability to build roads and despite the physical obstacle of this fell, managed to build a road over the fells to connect their forts at Galave (Ambleside) and Brocavum (Brougham, near Penrith). In more recent times it has been the site of fell-pony races hence the fell’s alternative name, Racecourse Hill. We followed the classic ascent via Rough Crag from Mardale Head making a circular route including Mardale Ill Bell. This route along the ridge of Rough Crag and the rocky stairway of Long Stile together form what’s known as the Conoisseur’s route up High Street. 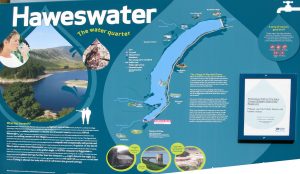 WEATHER: Beautiful weather to begin with a glorious views . . . just a shame that the same can’t be said for the summit which was swathed in mist reducing views to a disappointingly short distance then rain before the sun shone once more.

The bright and shiny new sign above is at the car park and shows the lakeside path . . . but not for us today.

The view across Haweswater from the car park . . . we must be early – there aren’t many other cars here at the moment but there’s room for about thirty.  The view shows the ridge of Dudderwick from Mardale Head car park.

You can just see Mila through the gate and that’s the way we’re heading.  The valley of Riggindale is over to the right.  Through the gate and it’s an easy stony track to follow which is the footing of the Gatesgarth Pass leading into Sleddale.  However, we don’t follow the Pass for long before we turn right following the path sign-posted for Brampton.  The path then takes us alongside the drystone wall to a footbridge over Mardale Beck.

A panorama of the same scene with Braintree on the left and Harter Fell on the right.

Once across the beck we take a right and follow the path by the reservoir alongside another drystone wall.

A quick photo opportunity on the footbridge over Mardale Beck.  I’m obviously having 20 winks . . .or has the camera just caught me blinking!

Looking upstream in the other direction where Mardale Beck will become Small Water Beck higher up the fell. Beautiful blue skies for now . . . unfortunately they weren’t to last!

You can just see the path we’re going to be following on the left beside the reservoir.  We will follow the path to get to the ridge line which cuts up from the shoreline.

Any excuse for Mila to do a bit of climbing.  The valley of Riggindale behind and to the right of Mila was once the home to the Lake District’s last Golden Eagle.

It’s not long before we get this incredible backdrop along the length of Haweswater! Mila’s sucking a humbug . . . a great walking incentive!  This is the view as we climb up onto The Rigg . . . the name given to the tree covered promontory at the start of the Rough Crag ridge.  In the past, before the valley was flooded many of the houses of the small village including the church would have featured in this view.

Mila the ‘Fell Runner’ speeding up a fairly steep incline . . . Pal and I will be taking it at a much gentler pace and Mila will have to wait for us oldies to catch up with her.  Heading straight up Rough Crag ridge.  It’s a straight route up to High Street.

Mila always keen to get in a bit of climbing . . . but I don’t think she should be climbing on the dry stone walls even if they are crumbling in places!

Looking over to Whelter Crag, Lady’s Seat down to Speaking Crag which juts out into Haweswater.  In the distance is Four Stones Hill towards the bottom of the lake.

If you have very good eyesight you can just see a car heading to the carpark situated at the corner of the conifer wood to the left of Mila now quite some distance from where we started.

We’re higher still now and the view just gets better with views along the length of Haweswater.  The reservoir has an interesting history as I mentioned earlier as in the 1930s there used to be a small hamlet here called Mardale Green which was flooded by the Manchester Corporation to make the reservoir . . . quite sad really.  Occasionally some ruins of the hamlet appear when the water levels are low.

Following the steep path up . . . I’m not quite sure what Mila was saying here but I think she’s pointing out something of interest . . . we’ll never know what that was!

Looking back to The Rigg from the traverse path and the route we’ve walked up Rough Crag ridge.  The complete ridge to High Street is in fact made up of four ridges – the first called The Rigg (meaning ‘ridge’) which refers to the small wooded area at the shore line, then the ridge of Dudderwick; then Rough Crag and the Long Stile, which almost like a rocky staircase and needs a little scrambling in places though it’s quite straightforward.

Beyond Mila is the Gatesgarth Path from Rough Crag (Gatesgarth takes you over to Longsleddale where you can climb Kenmore Pike).

In the distance you can see the Pennines beyond the reservoir.

Behind Mila is one of the Lake District’s deepest small lakes Blea Water.

Mila and Pal taking a moment to enjoy the views.

Some great rocks for Mila to perch on.

Blea Water is on the far right of the photograph.

stunning views though the clouds are becoming more ominous unfortunately.

Mila taking in the expanse below – there’s Blea Water on the right.

On the way up Rough Crag we stop for a close up of Blea Water which nestles in a glacial valley enclosed by the summits of Mardale Ill Bell and High Street.  The lake has been dammed to to provide extra water to help power the mines and quarry that exist just a little further down the fell side.

Looking up at the final steep section the final ridge of Long Stile over Caspel Gate.  As Wainwright explains ‘Caspel Gate is the name of a grassy depression on the ridge: there is no gate.  The tarn dries up in times of drought.’ (High Street 6).  ‘Gate’ here means ‘way’ and probably refers to the route from Blea Water below.

Riggindale Beck weaves its way along the Riggindale Valley towards Haweswater.  The head of the beck comes from beneath the crags of Short Stile which in turn continues to Twopenny Crag and Kidsty Pike.

Looking back at the route we’ve just walked.  There’s Caspel Gate Tarn on the level ground between Rough Crag and Long Stile.  Haweswater is visible on the left with Blea Water on the right.

A little bit of scrambling which Mila loves.

Mila’s very unimpressed with the flurry of small flies buzzing around her face . . . luckily they didn’t stay around for long.

Looking back to Rough Crag from Long Stile with the Riggindale Valley on the left.  There was a bit more easy scrambling up the final section of Long Stile.  In this close up you can just about see the path we followed . . . a very straight forward route to follow.

Looking down on Blea Tarn from the ridge of Long Stile – unfortunately the cloud is starting to descend and the views are becoming hazier.

Pal and Mila at the trig point on High Street summit.  The summit is fairly flat and stony and otherwise featureless therefore in mist it can be very difficult to navigate.  Luckily despite the mist having spoilt the views our route was still quite easy to follow.  It’s hard to imagine that horses have even raced across High Street in the past, not to mention the Romans . . . a rich history!

Heading towards our Mardale Ill Bell.

The path behind Mila is our route and leads down the path to Mardale Ill Bell our next summit.  Behind Mila is the Kentmere Pike.  Typical me . . . I didn’t take any photos on the summit of Mardale Ill Bell, but as the route goes right over the fell we definitely walked over it!

There’s Harter Fell ahead but we’re not going that way today . . . instead it’s time to start heading down.

Heading down towards Small Water.

Mila standing for a photo beside the shelter on the Nan Bield Pass.

Mila and I were curious about these yellow slips of paper between the dry stone wall of the shelter . . . we soon discovered that they had been left for Duke of Edinburgh groups to find so, having read them, we returned the slips for the groups (which we hadn’t seen) to find.

This three sided shelter is the perfect spot to rest and a well known landmark on the Nan Bield Pass.

The rain clouds are gathering obscuring the views. We head down past Small Water and continue our descent.

I look a bit gloomy with all the rain . . . though it looks like Mila is giving me some positive words of encouragement.

The path runs down the side of Small Water.

The sun has come out once more and the layers have come off . . .

Small Water Beck cascades down the fell side.

How the weather has changed now we’re almost down, dramatic clouds and bright sunshine.

Soon after we’re back to the car . . . a great walk and another one I’d like to do again on a clear day so I can enjoy the views even more!