This is what I wrote in my diary . . . ‘Helm Crag today – always a pleasure – gives you a taste of the Lake District – steep and impressive though very short.’  Which pretty much sums it up.  Despite it not being a circular route, which I usually prefer, the views ascending and descending are beautiful and varied enough for this not to be a problem. 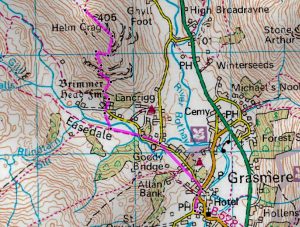 WEATHER: Cloudy and overcast but dry throughout.

This was our second walk up Helm Crag, the first being several years ago on 23rd July 2009 – but this had been the day after we had got completely drenched ascending Haystacks and despite my camera being inside my coat (in its camera bag) it got so wet that it broke so I have no photographs of that visit – so the hope was to get some good photographs this time at least!

Helm Crag and the object of our walk today.  The walk starts opposite the small public park – cross the road and head up the Easedale Road.  We then followed the fenced path beside the meadow to cross the Goody Bridge entering into Easedale.  Soon the road leads via a gate through the middle of a meadow and then narrows again at Little Parrock – meaning ‘the little paddock’. From here we kept right and as you approach Brimmer Head Farm you can see a signpost ‘Far Easedale and Helm Crag’ – so just follow the sign . . . A cobbled path rises by a large dilapidated house to a metal gate.  Here there’s a private walkway open to the public signed right to Lancrigg – once owned and renovated by the poet William Wordsworth.  The path is known as the ‘Poets Walk’ and leads through a woodland to the Lancrigg Hotel.

From the metal gate two routes diverge.  We took the route to the right through the short lane flanked on either side by woodland, taking the marked route which climbs with an engineered zig-zag path directly above the old quarry to the surface.

A panoramic view south to west.

A view over to Easedale, left to right: Silver How; Lang How; Great Castle How with just the peak of Pike o’ Blisco showing above; Blea Crag above Easdale Tarn, which is just out of sight from which Sour Milk Gill flows.  Far Easedale Gill is the stream on the right of the photograph.

(In fact there are three Sour Milk Gills in Lakeland! Rather confusing!  The others are on the Red Pike flank of Buttermere and the flank of Base Brown above Seathwaite).

As we gain height across the valley you get your first glimpse of Grasmere Lake with Loughrigg Fell behind.  In the centre of the photograph is Silver How.

Up the clear path and we’re soon out into the open once more.

This striking dragonfly is aptly named ‘Golden-ringed’!  This beautiful example is an adult female (as males are clearly waisted at segment three whereas females have more parallel sides and a very long ovipositor – basically females are longer and thinner than males).  Females are about 10mm larger than males being about 84mm with a wingspan of up to 101mm – impressive.  Its brilliant green eyes are indicative of it being an adult as immature golden-ringed dragonflies have brown eyes!

Here’s Pal looking serious . . . with Mila breaking the ice with her silly faces!

Heading up, there’s always time for a photo – this time it’s Mila and me with Sour Milk Gill in the background – rather ominous grey clouds which luckily didn’t come our way.

Easedale Tarn is the source of Sour Milk Gill but is just tantalisingly our of view!

Heron Pike (with Stone Arthur in front) on the left; Wansfell Pike beyond; Loughrigg Fell beyond Grasmere Lake; Claife Heights in the distance beyond Loughrigg.  The ridge looking like it comes from the right of Loughrigg Fell, leads to Silver How though there is in fact a road between the two fells.

A clear view of the Grasmere Lake, only one mile long and about 1/2 mile wide.  The small island in the centre was inspirational in the foundation of the National Trust as a way of protecting important sites from private ownership and potential development.

The island came up for sale in 1893 and Canon Hardwick Rawnsley a “great defender of the Lake District landscape recognised that no organisation existed to protect it.”  Such sales of important sites brought Rawnsley; Sir Robert Hunter and Octavia Hall together and they held their first meeting in November 1893 and in January 1895 the National Trust was founded.

The island on Grasmere Lake was the poet William Wordsworth’s favourite destination while he was staying at nearby Dove Cottage.  Incredibly this privately owned island was gifted to the National Trust in February 2017!  The island provides a quiet haven for wildlife, including a heronry comprising four nests.

Still heading up (Far Easedale Gill in the background).

Loughrigg Fell on the far left with the ridge (the wooded Red Bank) appearing to lead to Silver How (just right of centre) then leading on to Lang How on the right with the Coniston fells behind.

Far Easedale Gill, Calf Crag then Gibson Knott on the right with the dip being Bracken Hause and on the far right the slopes of Helm Crag.

A clear path to follow and now, looking back, if you look very carefully you can just see the source of Sour Milk Gill with the first view of Easedale Tarn.

Higher still and the village of Gramere is clear to see with its lake and Loughrigg Fell beyond.  Following the ridge right from Loughrigg would appear to bring you to Silver How (just out of the photo on the right), though there is a road between them.

The slopes of Helm Crag.

Pal and Mila almost at the top of Helm Crag.

The summit ridge of Helm Crag up ahead.

Mila in her element – enjoying the opportunity for a bit of a scramble.

Mila in her element!

The perfect place for rock scrambling . . .

Isn’t this an incredible view for such a small fell (201 out of 214 Wainwright fells in order of height).  As Wainwright explains, (Helm Crag 5), ‘The summit ridge is 250 yards in length and is adorned at each end by fangs of rock overtopping the fairly level path.  Between these towers there have been others in ages past but all that remains of them now is a chaos of collapsed boulders, choking a strange depression that extends the full length of the summit on the north-east side. . . . ‘

Mila enjoying the view . . . and behind her more views . . . left to right (looking north): Helvellyn; the the darker summit above Mila’s head is Nethermost Pike; then Dollywagon Pike (pale grey to the right of Mila’s head) and in front are the slope of Seat Sandal with the A591 running along its base.  Near the A591 you can just see the Achille Ratti Climbing Club Hut.

Wikipedia explains that Dunmail Raise is the name given to a large cairn (which stands on the top of the pass, on the central reservation between the two carriageways of the road) which may have been an old boundary marker which has given its name to the mountain pass of Dunmail Raise, on which it stands.  According to local tradition, the cairn marked the burial of a king named Dunmail who was slain by Saxons.

Looking along the ridge south west – there’s the summit rocks known variously as: The Howitzer; Lion Couchant; Old Woman, etc.) –  with the undulating ridge of Gibson Knott along the ridge on the left.

Taking in more of the same scene in a panoramic view looking along the Helm Crag ridge and beyond to Gibson Knott to the left and Steel Fell on the right.

This is the classic view of the ‘rocks at the south-east end of the summit ridge.  These form the official Lion and The Lamb.  The lion’s head is the O.S. ‘station’ (altitude 1306′) but is not quite the highest point of the fell.’ (Helm Crag 7).

Confusingly, as you’ve already seen, the rocks above can also be referred to as the lion and the lamb.  This is in fact the highest point of the rocks and is the true summit of the fell and, and just like Wainwright, we didn’t actually manage manage to climb to the very top . . . a bit too scary for me!  As Wainwright says (Helm Crag 5), the ‘Rocks at the north-west end of the summit ridge, known by various names: (a) The Lion Couchant, or more popularly, The Lion and The Lamb, (as seen from the road below Dunmail Raise) (b) The Howitzer (as seen from Dunmail Raise).

Looking down on Gibson Knott . . . next time we definitely have to include this ridge!

Above Easedale Tarn the dark fells are Harrison Stickle and Pavey Ark.

Silver How and Lang How with the Coniston Fells beyond (Wetherlam; Swirl How; Great Carrs; Grey Friar).

Pal and Mila having a good laugh . . . mmh, if only I could remember the joke!

On our way down now . . . and a quick look back to the summit of Helm Crag.

The views clearer now we’re on the way down!

A great view looking north east with Seat Sandal on the left; Grisedale Hause (the dip); Fairfield then the bump on the ridge is Great Rigg.  The road running along the base of the photograph is the A591.

There’s our little photographer capturing the views . . . as I capture Mila in a photo!

Mila and me . . . Pal’s the photographer this time!

Heading down and just enjoying the vista . . . the scenery is just so beautiful!

Looking carefully you can see the path which follows the wall below and some other walkers enjoying a break too.

Back along the Easedale Road and into Grasmere – it’s definitely time for tea a stickies!

Wow . . . that’s a big piece of cake!  A great cafe, Baldrys in Grasmere . . . thoroughly delicious! The perfect way to finish the day.