An unexpected day off work, cold but dry so the chance to do a bit of exploring in our local area of Cambridgeshire!  So today I’m going to do a walk based on route in the book the Pathfinder Guide – Cambridgeshire and the Fens – ‘Gog Magog and the Granta Valley’. 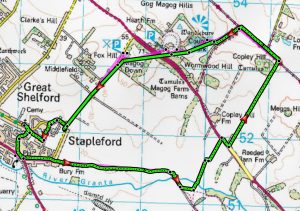 WALK DETAILS: 7.3 miles, an impressive array of birds on the route including a Green Woodpecker; Magpies; Blue- tits; Great Tits; Chaffinches; Green Finches and Robins among other birds. Extremely muddy in places.

WALKED WITH: A walk by myself.

WEATHER: Cold but clear skies and dry – luckily not windy.

Looking back at the car parked on the roadside in Stapleford at the beginning of the walk.  In the book the walk starts from Wandlebury but I thought I’d leave the Country Park to the end of the walk. So walking back to Gog Magog Way its off we go!

A chocolate box thatched cottage near the beginning of the walk . . . I’ll take the path to the right onto Bar Lane.

It’s not long before I took a right onto Vicarage Lane which leads through to Church Lane . . . you’re going to see lots of long straight paths on this walk.

The village sign, looking very colourful in the afternoon sunshine.

It’s worth making a slight detour along Vicarage Lane to visit the beautiful flint built church of St Andrew’s.  Inside the guide book tells me that the church has an ‘early Norman chancel arch with the sides pierced by squints to allow those seated in the aisles a view to the altar.  A Saxon grave marker and Norman grave cover are also relics of its early history.” 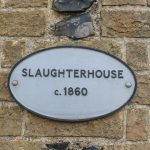 Retracing my steps to continue back along Church Lane the way I’ve just come I soon passed this small flint building which was in fact an Slaughter House from about 1860.  I’ve no idea what it’s used for now though it had a village notice-board on the front.

At the main road I turned left passing The Rose pub then left into Bury Road.

As the road bends I continued straight away so Stapleford Granary (which is a great venue for concerts etc. but not for today) is on your right and there’s a not very obvious public right of way down the side which is the way I’m heading.

Along the track, which in places (especially at the far end) was very muddy and quite slippery (but nothing like as muddy as later on on the walk).  I met a few dog walkers on the route but on the whole it was very quiet.

The path takes you across open fields giving you a view of the Magog hills – yes, that’s the slight incline on the horizon – remember we are in Cambridge and Cambridge doesn’t really do hills!

I can imagine it’s wonderful to watch a sunrise or sunset from this memorial bench.  Cambridgeshire is famous for it’s big skies and here the expanse of sky is impressive.

Crossing the stile at the corner of the field and there’s the little bridge over the River Granta.

There’s also a ford running alongside.  On this walk I’m going to cross it and then after a walk through the trees re-cross the river by another wooden bridge.

The Granta is more of a stream than a river at this point . . .

I think I could have taken this path off to the left, but I thought I’d leave it this time and keep to the route I’d planned . . .

. . . which just entailed following the track for a short way before turning off left through a kissing gate.

The grassy path takes you through a plantation of saplings.  When I came to the ‘crossroads’ I turned left which basically took me through another field.

There’s been quite a lot of tree cutting along here . . .

Through a few more trees and it’s out into the open again.  There were an impressive variety of birds to see through here so it was really beautiful . . . unfortunately I wasn’t quick enough with my camera to capture them on film!

Across another wooden bridge (re-crossing the Granta river).

Across the busy Babraham Road then turning right a short way before turning into the bridleway, Mile Road.

Another straight path . . . lots of evidence of the Romans!  This rises gently levelling beside the trees of Copley Hill.

Copley Hill – is said to be the site of a large Bronze Age burial mound.

Just as we turn left onto the Roman Road, Via Devana (the 18th century name for the Roman road build around AD43 to link the Roman camps at Colchester and Godmanchester, there’s a very interesting information poster.  It tells us that the road was made almost 2000 years ago and runs for 10 miles.  It would be interesting to visit here later in the year as there are a number of flowers said to be flourishing along the wide verges which were once common on the chalk grasslands of South Cambridgeshire which is why the northern half of the road (know as Wosted or Wool Street) is a Site of Special Scientific Interest.

Unfortunately the path is also used by some authorised vehicles and is extremely muddy.  There was no way to escape it and although it doesn’t look very deep my incredibly muddy boots and trousers are testimony to it being very deep and very squelchy!

It took me a moment or two to work out how these corn cobs got here . . . then I realised that animals must have taken them from the nearby fields of corn!

This left turn is sign-posted Wandlebury Ring and Cambridge.  There were fair more dog walkers along here but still some beautiful birds to enjoy.

There were a number of these memorial benches along the route.

Right past the cottage, then keeping left . . .

There was an interesting notice about the recent hedge-laying here.  It explained exactly how they do it, cutting away much of the stem at ground level then bending down or ‘pleaching’ the stems at an angle.  This process is then repeated with the rest of the hedge and then the sides are tidied up.  Stakes are also put in to strengthen the hedge.  A laid hedge is particularly important for its conservation benefits and as it grows it becomes thick with new growth from the base of each cut stem.  This provides shelter and nesting space for birds as well as small mammals and can act as a windbreak for crops or livestock.  The information sheet says that planting species such as Hawthorn or Blackthorn provides spring blossom for pollinators and berries in winter which is a vital food source for many species.  They can also be essential corridors for wildlife that would otherwise nor cross open space, such as woodland birds and allow for greater connectivity of habitats and wild areas.

Past the Wandlebury car park then out of the country park and back across the busy Babraham Road.

I should have found crossed over the road then taken the opening on the left but somehow I managed to miss the opening (which would have taken me onto Magog Down) and ended up on the muddy verge following the road till the left turn back towards Stapleford.

This section is a bit easier underfoot with the pathway.

The big skies of Cambridgeshire . . . it is huge isn’t it . . . the sun shining through the clouds.

Almost back to the car now.

An interesting walk . . . time to set off for home.